The difficulties were present from the start. Hindrances everywhere and problems that, in any other case, would have discouraged those involved. We chose to insist.

Aetoloakarnania plays a dominant role in energy production from RES. We struggled to convince people that farmers have the right to participate.

Although the whole effort has been greatly undermined, those who invested in photovoltaics have already been vindicated for their choice.

At the same time with the preparation for the submission of applications to the Power Public Corporation (hereafter PPC), from late July 2010, the collection and editing of all the necessary documents, technical drawings etc. had begun for the authorization of facilities.

The problems that emerged during this process were in no case negligible. Despite the considerable efforts of the Ministry of Environment to simplify licensing procedures, particularly for farmers, the vast amount of bureaucracy, lack of information and misinterpretation of the law by several public services, significantly delayed the issuing of licenses. The licensing procedure for the construction of facilities was finally completed by mid-October 2011.

Among the important issues that appeared was the inability of the PPC power grid to absorb the produced power total of about 100 stations in the areas of Fyties and Lepenou. After consecutive meetings with representatives of the PPC in Agrinio and Patras and a demonstration organized by the producers towards the PPC offices in Agrinio, an agreement was reached to construct a new MT line which would cover the overall number of power-producing stations. The Union took over, at its own expense, the responsibility to carry out the above line study, which later on was handed to the technical departments of PPC in charge.

In December of 2010 and while the licensing process for power stations in Aetoloakarnania was still going on, the PPC announced the commencement of receiving connection requests for new photovoltaic power stations of up to 150 kW at all interconnected islands.

In a very short time, equivalent groups in charge of informing, carrying out land compatibility checks and receiving the necessary documents, were organized. An important number of meetings occurred in towns and villages, and finally in early February 60 requests were filed at the local PPC branch.

A total of 110 requests were submitted in the Prefecture, whereas 25% of total requests were granted. This rate is significantly increasing, taken into account the fact that the majority of the remaining requests were private and not of individual farmers - investors. The success of the whole endeavor is even greater when one considers that at the interconnected islands there was no priority given for farmers. 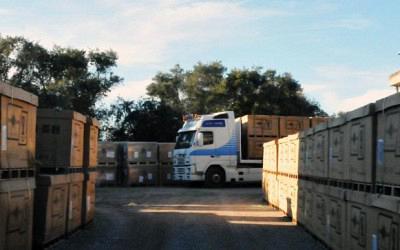 During the summer of 2011 the Union, representing the farmers-investors of both Aetoloakarnania as well…

The initial enthusiasm for the completion of the projects was followed by disappointment, due to…