The first stevia planting in Europe took place in Agrinio. This is where the factory will be built

We established the foundation for spreading stevia’s cultivation. We expect that in the years to come, there will be a significant increase in production

The Stevia rebaudiana bertoni is a herb of the Compositae family, which is native to Paraguay and Brazil.

The glycosides found in its leaves are extremely sweet, a property which makes it unique among the approximately 300 species of stevia.

The stevia plant is used as a sweetener for over 400 years. It is named by Moises Santiago Bertoni who discovered it in 1887. 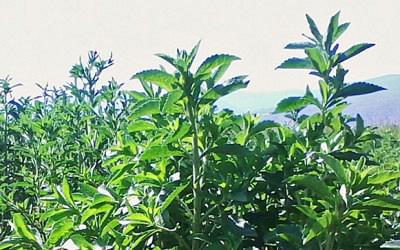 Years ago we had promised to our farmers that they would be the first to cultivate stevia in national and European level. And so was done.

It is a perennial herbaceous plant of 0.6 meters when native (in tropical warm climates). It is also cultivated as annual plant in various, colder, regions of the world.

Its leaves are small, of 5 centimeter long, although there are big-leaf varieties as well. Growing stems develop crosswise.

The flowers grow in white clusters (corymb). The flowers are hermaphroditic and are pollinated with the help of insects. It flowers in autumn.

The stems are initially tender and then they become semi-woody.

Its root system is superficial and therefore it does not withstand water shortages and strong winds.

The seed, when it is in good condition, is small and black.

Stevia is cultivated in Latin America, to which is a native plant, but it is the Asian countries that now dominate in its production.

China is the largest stevia grower in the world, while Japan and Korea have the biggest share in the stevia extracts market. Recently, the US, Australia and New Zealand have adopted some stevia preparations as an ingredient in foods and beverages in their markets.

Stevia is a plant well known in many parts of Asia and Latin America that is used as a sweetener in various foods and beverages (as a food additive). It can also be used as infusion (medicinal tea) or in salads, fresh or dried. The plant’s glycosides called stevioside and rempaountiosides-A, are contained in the leaves. 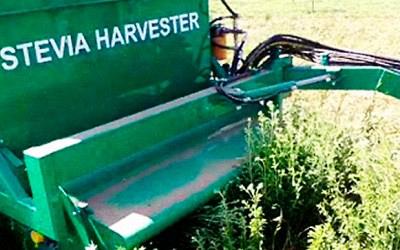 Stevia grows in subtropical humid climate with rainfall of over 700-800mm per year, while it prefers well-drained, sandy or sandy clay soils. As to the reaction of the ground, most suitable are considered soils with slightly acidic reaction and if grown in alkaline soils (pH≥8) the plant growth is limited and slow. There is no growth in saline soils.

It grows at a temperature from 15 ° C to 30 ° C with a maximum temperature of 41 ° C. It grows in climates ranging from temperate to tropical and cannot withstand low temperatures (below -6 ° C). For this reason, in our country, sowing should be done in early spring seedlings and transplanting should be after the last expected frosts.

It is a photophilous plant and there is no growth in shady locations. 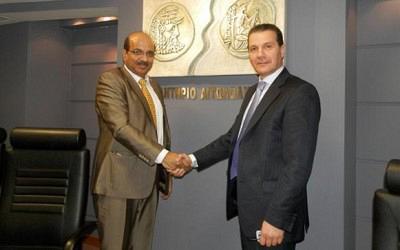 The Indian, worldwide pioneer, SunFruits enterprise confided in the Union of Agrinio, recognizing our good organization and reliability. The photo is taken during the official announcement of our cooperation.

The ideal way of plant propagation is asexually, using stems (cuttings) or leaves of the plant. The production costs are, however, prohibitive.

For this reason stevia is propagated by seed in greenhouse (at 24-25 ° C) conditions and produces seedlings for 8-10 weeks. Regarding the production of leaves, it is necessary to continuously use lighting on the plants in order to avoid early bloom.

Transplanting is done during spring, taking, however, into account the climatic conditions. In Canada replanting is done in May while in warmer countries, like Greece, it may start earlier. Sown at distances 50-70 cm between rows, with a total density of plantation at 7,500-8,000 plants / decares, which is considered ideal.

Before planting and after the plowing of the soil, 1-2 machining by a disk or a hoe are done, so as to create a smooth bed. 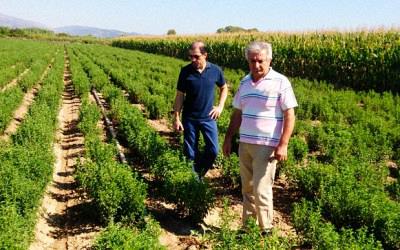 The vice president of the Union, Mr. Ioannis Kallimorfos and the manager, Mr. Nikos Kazantzis.

The plant has small nutrient requirements, nevertheless the texture of the ground should be checked.

In experiments conducted in Ontario, Canada, it was found that fertilization with fertilizer 6-24-24 at 10 kg/decares before transplanting and 14 kg/decares with urea after transplanting is satisfactory. Experiments in our country have shown that stevia works best when manure is incorporated in the soil before transplanting, maybe some fertilization preparation as well, depending on the needs of the soil in the respected areas. Generally nitrogen is the most important nutrient for the stevia as associated with the growth of foliage.

In tropical areas, stevia does not require irrigation. But in areas such as Greece, where the rainfall does not reach the 700mm per year, irrigation is required. It is essential to be frequent and surface irrigation to achieve higher returns. Generally, irrigation is necessary when the tips of the shoots begin to droop. The most suitable irrigation method is drip. 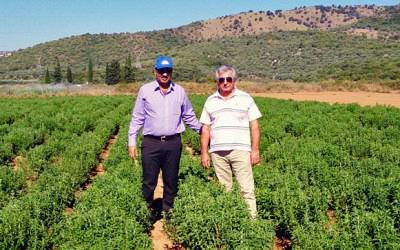 The herbicide is recommended to be repeated with the use of mechanical means. Additional control with weeding or herbicides may be required.

The plant protection is not a particular problem as attacks from insects are minimal,but not in case of worms.

Problems can be created by the fungi of the genus Septoria (Septoria steviae), Sclerotinia (Sclerotinia sclerotiorum), and the frost and strong winds. Also species such as rabbits have been observed to cause damage because they prefer the fresh leaves of the plant. 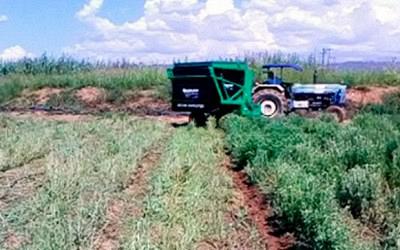 In the years to come, we aim at increasing production. For this, we create the necessary infrastructure in Agrinio.

Harvest is done either regarding the whole plant or the leaves just before flowering, by hand or mechanically.

The time of harvest depends on the variety, the latitude and the growing season. Generally harvested in the autumn, when the plants are 40-60 inches in height.

The optimum yield (biomass), as well as better quality and quantity of stevioside (stevioside) achieved just prior to flowering.

Drying lignified stems and green leaves is completed immediately after harvesting using ovens and sunlight and the best quality is achieved. Depended by the  weather conditions and the density of loading, typically required 24 to 48 hours at temperature 40 ° C - 50 ° C.

Immediately after drying, a specially designed thresher / separator is necessary to separate the dried leaves from the stalk.

Dry leaves are stored in plastic-lined cardboard boxes. Further processing by extracting is required to extract the steviol glycosides on a commercial scale (for use as a food additive).

The cultivation in Greece 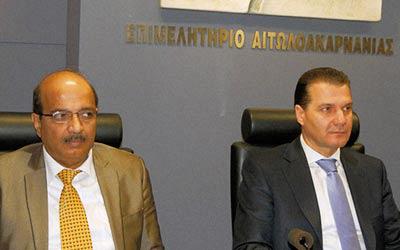 Our exclusive, direct cooperation with the Indian SunFruits and Mr. Shivraj is based on the foundation of productive restructuring and the optimum use of our forces. The Greek saying "every beginning is difficult" certainly applies here as well, steadily, however, we are to overcome any difficulties and plan the next steps in order to give a real outlet to those who want to produce.

The cultivation of stevia can be an alternative solution to several former tobacco producing regions of Greece, since it requires the same manipulation with the cultivation of tobacco. Also experiments have shown that yields over 200 kg of dry leaves / decare in various parts of the country, performance which is considered the threshold to be economically viable crop.

The Union Agriniou after studies and experimental crops in cooperation with universities and scientific institutions opened the way for plant cultivation in Aetoloakarnania, Greece and Europe.

The agreement with the Indian SunFruits 2014 allowed the entry of the first thousand producers in the new and promising crop. The design for years to provide up to create works in Agrinio area, which would give an enormous potential in the product and real solutions to farmers. 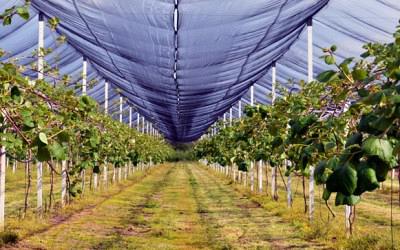 Almost ten years ago, the Union of Agrinio, in some cases in collaboration with A.C.… 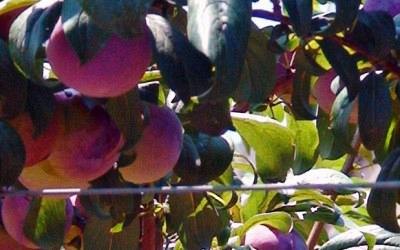 The plum tree is  considered native of western Asia, in Europe, however, like in our…